“I came from a medical Family,” admits Dr. Khalsa

His grandfather was a pediatrician, his father was a surgeon, and his mother and both his sisters were 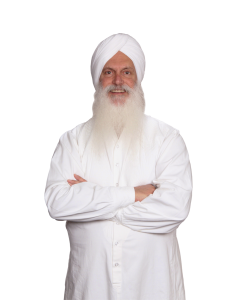 nurses. Growing up, he always expected he would become a surgeon, like his father. Isn’t it strange how life takes you to places you never thought you would go.

Dr. Khalsa suffered from headaches and chronic sinus congestion from the time that he was a child. Growing up in a doctor’s home, he had easy access to nose drops and used them everyday. When he was ten years old, he lost his sense of smell due to his over use of nose drops. While he has a very healthy respect for the medical approach that he grew up in, losing his smell from drugs led him to look for natural ways to help himself and others.

He also had headaches at least several times a week and took aspirin on a regular basis. These were ancient times before Tylenol and Advil. When Dr. Khalsa was 20, a friend suggested that he see a chiropractor for his headaches. He didn’t know anything about chiropractors except that they were not thought of highly by medical doctors. But he was tired of having these problems and he wanted to try something without any medications. He had a very positive experience: his headaches significantly improved and his sinuses were much clearer.

At that point, in his own words, “Even though I was going against my family tradition, I decided to go to chiropractic college instead of medical school.”

Dr. Khalsa began his pre-chiropractic education at the University of Michigan where he studied the basic sciences such as inorganic chemistry, organic chemistry, biology, along with basic physiology and anatomy courses.

After completing his study there, he was accepted at Pasadena Chiropractic College. During his four years at chiropractic college, courses included biochemistry, a major emphasis on anatomy and human physiology, X-ray, diagnosis, chiropractic adjusting techniques and patient care in the college clinic. After graduating in 1979 Dr. Khalsa opened his practice here in Pasadena and he has continue to help people in this area for over 30 years.

Dr. Khalsa’s orientation is to family wellness care. His style of chiropractic is designed to help a person to move towards optimum health, not just to alleviate symptoms. For that reason he has many families in which the parents and all of the children come regularly to grow their health. He is especially interested in working with children. One of his motto’s is “I would rather grow healthy children, than repair damaged adults.” He believes that chiropractic care is an important part of a healthy lifestyle just like good diet and regular exercise.

His specialty as a chiropractor is to always look for the deeper causes of health problems and energy imbalances in the body. In addition to correcting spinal interference to the nervous system, he has learned and developed many techniques to find out what has caused the nerve interference on a deeper level: improper diet, poor nutrition, food sensitivities, poisons that need to be detoxified, mental blocks, and emotional wounds. His work with these deeper techniques allows him to work with all types of complaints: musculoskeletal, neurological, digestive, hormonal, immune, respiratory, circulatory, emotional, spiritual, etc.

Dr. Khalsa is married to Suraj and they have three children, and two grandchildren. His first two children were born at home and after his first daughter had a bad reaction to a vaccination, none of his children have been vaccinated since. (If that sounds interesting, be sure to ask Dr. Khalsa to explain!)

In addition to his practice as a chiropractor, he has also been the director since 1977 of The Awareness Center, where he has taught Kundalini Yoga and meditation to thousands of people since 1975. He is also the master teacher for the Awareness Center Level I Teacher Training program and has trained hundreds of yoga teachers. He practices yoga and meditation without fail every day of his life and eats a healthy vegetarian diet. With his white beard and sparkling eyes, many of his younger practice members call him “Santokh Claus” during the Christmas season.

“Thanks for visiting our site. I have been helping people to achieve their health goals for over 30 years. Call our Pasadena chiropractic office to get started with chiropractic care today! I look forward to meeting you and would be honored to help you achieve YOUR health goals.”